Today’s post is from another guest blogger who I met fairly recently as I reached out in my through my blogging. Please welcome Judy from JayJaysFavorites. I hope that you will click on the link and explore her blog. She is a talented photographer and posts some beautiful photo’s. My personal comments are found at the end of the post. I invite you to join in the discussion. 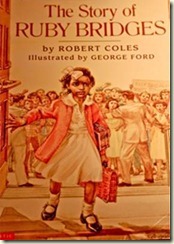 The book: “The Story of Ruby Bridges”

Ruby Bridges was born in Mississippi in 1954, the same year the US made the decision ordering the integration of public schools.

In 1959, she attended an all-black kindergarten in New Orleans.  In 1960, when Ruby was six, the New Orleans’ public schools were forced to integrate black children into white schools. Ruby took a test and found she was assigned to all-white William Frantz Public School for first grade. Ruby’s mother was for it, but her father was against her going to an all-white elementary school.  Her father felt they were asking for trouble; he thought things would never change and blacks and whites would never be treated as equals.  Her mother convinced her father that, despite the possible risks, they had to send Ruby to William Frantz P.S., not just for their children, but for all black children.

On November 14, 1960, Ruby and her mother walked into William Frantz school, surrounded by Federal Marshals for protection. Out of six black children assigned to white schools, Ruby would be going to William Frantz alone.

People shouted, yelled and shook their fists at Ruby and her mother as they walked into school. They carried signs that said: “Keep this school white”.  When Ruby and her mother sat in the principal’s office, Ruby could see them through the window, pointing at her, screaming and pulling their children out of the school.  In all the furor that day, Ruby never got to her classroom.

The second day, a lovely young white woman met her at the door.  It was Mrs. Henry, her teacher.  They sat side by side working together on lessons every day.  No other children attended William Frantz then, but the line-up of noisy, rude protesters remained almost until the very end of the school year.

Ruby prayed on her way to school: “Please be with me God, and be with these people too. Forgive them because they don’t know what they are doing.”

Ruby Loved Mrs. Henry, because she made learning fun.  The people outside screaming at her were white.  Mrs. Henry was white, but she was so different from them.  She was one of the most loving people Ruby had known.  Ruby said the greatest lesson she learned that year with Mrs. Henry was the lesson Dr. Martin Luther King, Jr. taught everyone: “Never judge people by the color of their skin.  God makes each of us unique in ways that go much deeper.”

Ruby finished first grade.  When second grade started, the school was filled with children again.  Ruby was surprised to see a few black children in her second grade class.  The years went by.  Ruby graduated from an integrated high school, then became a travel agent, after studying travel and tourism in business school. She became married and has four children.

When her youngest brother died in 1993, Ruby helped take care of his daughters, who went to William Frantz Public School. She started volunteering there three days a week, working as a liaison between parents and the school.  When the book “The Story of Ruby Bridges” came out, she was reunited with Mrs. Henry.  Ruby gives speeches on racism and education across the country, and Mrs. Henry often accompanies her.  Ruby says, “School can be a place to bring people together~kids of all races and backgrounds.”

Ruby Bridges was a brave and delightful young child, who was wise beyond her years. Ruby walked through horrific chanting and name-calling to get the education she deserved. No child should have to do that. But Ruby is a survivor, a peacemaker and a child who brought other children back to learn together. Today we celebrate the life of Ruby Bridges, and the accomplishments she achieved for education for ALL children.

Over this past month I have read many great stories about women who have helped to shape both our personal and world’s history. The journey has been informative and enlightening. One thing that all of these amazing women have in common is a courageous spirit. I am sure that for some they were shaking on the inside as they stepped out of what the “norm” was to help transform our world. I for one applaud and thank each of them for their willingness and desire to see things differently. I also want to thank each one of you that wrote a guest post for the occasion.

Please visit my Celebrating Women’s History page for a complete list of bloggers and posts that were honored in March.

I welcome and invite your comments, after-all that is what makes the blogging world so fun.

22 thoughts on “From the Eyes of a Six Year Old”

If you have something to say I'd love to hear from you. Cancel reply